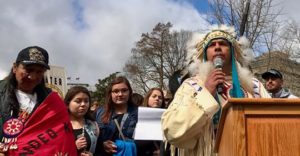 After seven months, the Trump administration has finally provided its views in a closely-watched treaty rights case and it’s not looking good for Indian Country.

In a brief submitted on Tuesday, the Department of Justice called on the U.S. Supreme Court to grant a petition in Washington State Department of Licensing v. Cougar Den. In doing so, the Trump administration is going against tribal interests and is even drawing attention to a prior case that affirmed the treaty rights of the Yakama Nation.

According to government attorneys, a business owner on the reservation must pay gasoline taxes to the state of Washington. The 1855 Yakama Treaty — which specifically guarantees “free access” to public highways — does not shield tribal citizens from the state’s authority, they told the nation’s highest court.

“The ‘right, in common with citizens of the United States, to travel upon all public highways’ protected by the 1855 Treaty, is not violated by the tax at issue here,” the brief signed by Solicitor General Noel J. Francisco, an appointee of President Donald Trump, read.

The brief was filed a day after Indianz.Com drew attention to the long wait for the Trump administration’s position in the case. The Supreme Court issued what is known as a CVSG, or a call for the views of the Solicitor General, as the influential Turtle Talk blog once explained, in early October, or more than seven months ago.

Since then, the justices have issued two more CVSGs. One was in January, when the court sought the government’s guidance in Herrera v. Wyoming, another treaty rights case involving the hunting rights of the Crow Tribe.

As with Cougar Den, a state is attempting to assert its authority over a tribal citizen. Clayvin Herrera, who is Crow, was prosecuted in Wyoming for a hunt that took place in the Bighorn Mountains, which he argues is still protected by 1868 treaty with the federal government.

The Department of Justice has yet to file a brief. Judging by the wait in the Yakama case, one won’t materialize until the end of the year.

The other CVSG surfaced on Monday. The Supreme Court wants the Trump administration’s stance in Osage Wind v. United States, a trust relationship case involving the mineral rights of the Osage Nation.

The CVSGs come as tribes with homelands in Washington face an unusual assault on their rights. Since the start of the Supreme Court’s term last October, the justices have heard two cases from the state — one about treaties and the  second about sovereignty.

If the Supreme Court agrees to hear Cougar Den, as the state and the Trump administration are urging, the move would be unprecedented. There haven’t been that many Indian law cases from a single state in eight years, when there were two from Arizonaon the docket in 2010. Going back further, there were two on the 2002 docket, also from Arizona.

More from the Cougar Den

Unlike the Trump administration, the Washington Supreme Court determined that the 1855 Yakama Treaty is implicated by the gas tax. In a March 2017 decision, the justices held that the Cougar Den, a fuel company based on the reservation, should not have to answer to state authority.Extensive evidence collected during trial showed that Yakama citizens “exercised free and open access to transport goods as a central part of a trading network running from the western coastal tribes to the eastern plains tribes,” Justice Charles W. Johnson wrote for the court.

He added that the “record unquestionably depicted a tribal culture whose manner of existence was dependent on the Yakamas’ ability to travel.

“Unhappy with that pro-treaty holding, the state of Washington petitioned the Supreme Court to overturn it. The opening brief argued that the tax does not violate the treaty, a position mirrored by the Trump team.

“The taxes do not violate a treaty right because they ‘are not a charge for Cougar Den’s use of public highways’ but relate to the wholesale fuel itself,” Attorney General Robert W. Ferguson (D) wrote almost a year ago.